Thank you for your interest in participating in the Arkansas Honey Festival’s Honey Contest. The guidelines for entering the contest and the rules for judging the People’s Choice Award and Overall Grand Winner are listed below. The entry form and contest guidelines are available as downloadable PDFs. 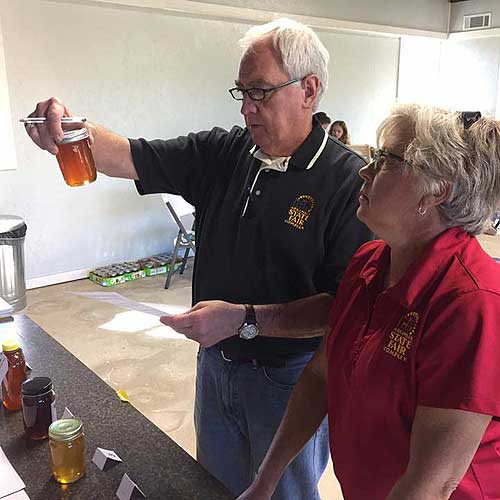 To enter the Honey Contest, you will need to have you bottled honey and an entry form submitted to the registration desk by 9:30 am on October 5, 2019. You may also drop off your entry to the Bemis Honey Bee store during the week prior to the event. We will have entry forms available at the event, but we recommend downloading the form and filling it out in advance.

The submitted honey must be pure/raw bottled honey that was produced in Arkansas in 2019 by the contestant entering the contest. Once the honey has been submitted to the contest, the contestant may not tamper with the bottle. One entry per person allowed.

One jar of honey (of any size) will be entered in the contest by the contestant. The entry must be checked into registration no later than 9:30am on October 5, 2019. Official judging will occur between 9:30am and 11:00am. The honey will be graded on: appearance, clarity, cleanliness of the jar, aroma, taste, and label design. A first, second, and third place prize will be awarded to winners with the highest score at 3:30pm.

Once the official judging has been completed, tasting of the entries will be open to the general public from 11:00am to 3:00pm. Each attendee at the Arkansas Honey Festival will have the opportunity to taste each entry and cast one vote for his or her favorite honey, while supplies last. Voting will close at 3:00pm and the votes will be counted. A first, second, third place prize will be awarded to winners with the most votes at 3:30pm.

The contestant with the highest score from both categories combined will be awarded the title of overall grand winner and receive the grand prize.